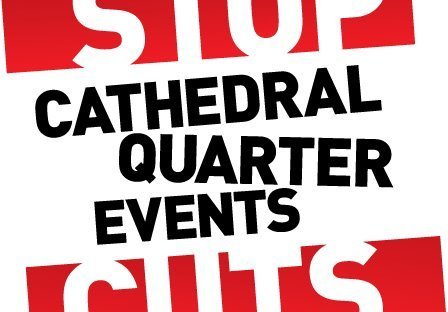 Organisations which normally apply for the funding were notified by letter the previous week that the grant closure would take effect on 31 March 2012, giving just under two months’ notice for groups to find alternative funding sources for events and festivals already being planned and budgeted for.

Although the grants scheme was open to groups in areas beyond the Cathedral Quarter, this is arguably the area which will feel most keenly the slashing of this budget. The Cathedral Quarter Arts Festival, Festival of Fools, Black Box events, Belfast Children’s Festival, Out to Lunch Festival and Culture Night are just some of the area’s cultural gems which are said to be under threat.

As you can see, the organisers of most of these events have already begun to fill their spring programmes.

The blow comes less than a month after sighs of relief were uttered at the Black Box, following news that its annual grant had been extended by the council. The council said the payment to the venue provides “value for ratepayers’ money”.


It didn’t take long for the Stop the Cathedral Quarter Events cuts Facebook page to be set up and at the time of writing, less than a week after the news broke, the page has nearly 3,000 supporters.

I urge the readers of The Patchwork Quill to join me in backing the campaign to reinstate this vital funding. Whether or not you live in Belfast, or indeed in Northern Ireland – if you believe in the importance of a rich cultural society, where the arts, self expression and creativity are celebrated then please add your voice to the cause.

The relatively small amount of financial assistance these organisations receive have allowed them to provide top quality music, theatre, circus, poetry and art at affordable ticket prices – something which is integral to their ethos. In fact, funding has thus far allowed the Festival of Fools to provide eclectic programmes of free street theatre.

To paraphrase one comment on the Cathedral Quarter Events cuts Facebook page, unless we want the arts to only be available to the rich, these organisations need this money.

My first experience of the Cathedral Quarter’s vibrant arts scene was nearly two years ago at the Open House Festival when I saw Seasick Steve for the first time, for a gig review for The Gown.


Since then, I’ve been lucky enough to return to this cool and quirky part of town to write reviews of shows at 2011’s Cathedral Quarter Arts Festival and the Out to Lunch Festival 2012 for the Belfast Telegraph and have yet to see a show I don’t end up raving about. Camille O’Sullivan, Drive By Truckers and Being Piaf were particular highlights.

Seasick Steve himself has added his voice to the debate, in his own inimitable style, which the Open House Festival posted on its Facebook page today:

“Well I just heard that the Open House Festival in Belfast has had some of their funding cut called the laganside event fund, which Iguess has helped keep them goin’ from the begining and such.

Well I dont know nothing how to a make a festival go but I do know that the open house festival aint no big corporate festival – they always put new music first, findin’ new bands that maybe dont have no money type draw but that they believe people would love, just for the sake of music. In these days thats a rare thing. Bout 7 years ago they took on a chance of havin’ an old guy who just recently sufferd a heart attack and that nobody new about at all – just about as obscure as they come. Well, that fella was me, Seasick Steve and I can say, straight up if it wernt for the Open House festival I never would have kept goin and never went on the Jools Holland show. Nothin’. Would never ever got to have all the success I have had all over the world.” [sic]

Steve acknowledges the ripple effect this little festival has had on his career and I think that’s the whole point. One cynic comments on the Slugger O’Toole article that ‘non-essential spending’ is being cut and “maybe the decision of the Department of Social Development to stop paying for people to put on plays is part of that?”

But a city needs a rich social life and entertainment scene in order for the other parts of it to stay alive. 2012 is meant to be Northern Ireland’s big fat year of tourism, centred on marking the Titanic centenary and trying to sustain the buzz generated by last year’s MTV Europe Awards in Belfast.

The simple truth is, people come to a country, to a city, to experience its culture. If the festivals, gigs and shows that are so integral to Belfast’s unique vibe either dry up or become so expensive nobody goes to them, then the city will become less attractive to visitors and the next thing to dry up will be its economy, which is suffering already.

2012 may be the year that the world comes to Northern Ireland to see the Titanic Quarter, but we want them to explore and enjoy the rest of this beautiful city too, so they have a reason to keep coming back once ‘Titanic fever’ has faded. Cutting off the blood supply to the heart of its social and cultural life is short-sighted and ill-advised.

Below you’ll find a template letter created by Stop The Cathedral Quarter Events cuts for contacting DSD with your objection to the funding cut, along with the relevant email addresses if you want to join me in opposing this awful decision.

RE: the Laganside Events Fund

Festivals and events in Cathedral Quarter are clearly a catalyst for regeneration and enjoy the support of the public, businesses, arts organisations and the tourism industry.

I would also request the rationale behind cutting a relatively small fund which has proven to be a key economic driver for the area over the past 12 years. Can you explain why events which have proven their economic worth to the satisfaction of funders such as NITB, fail to convince you?

I look forward to your response.