Or in English (hopefully) – welcome the Year of the Snake!

It is the first day of the Chinese New Year tomorrow (Sunday 10th February) and given Northern Ireland’s sizeable Chinese population, it’s no surprise to see the country poised to launch into weeks of celebration.

It is also known as the Spring Festival and apparently it’s traditional for Chinese families to clean their houses thoroughly to sweep away bad luck and make way for incoming good fortune in the year ahead.

Funnily enough, I have had a lacklustre start to the year in terms of energy, motivation and achievement. I usually really embrace the new year, use it as an excuse to take stock, make plans, start afresh.

However, in recent days I’ve felt a burgeoning sense of positivity and ambition in a number of areas of life – not least my crafting. I made my first handmade item of clothing this week, finally breaking the new sewing machine out of its packaging for the first time this year! My first blog post of 2013 was published pretty recently too.

So here’s to the Chinese New Year – the Quill, as you know, takes each and every opportunity to celebrate the myriad of cultures and races we are lucky enough to have on this small piece of land. Despite recent events, Northern Ireland remains a patchwork quilt of cultures and a warm and welcoming people and I am glad to have another chance to draw attention to that.

Below is a selection of what’s happening, but check the What’s On calendar later in the weekend as I will be updating it with details of everything I know to be happening over the weekend and weeks to come. Please get in touch if there is anything I have missed – I’d love it if you would share anything you are doing for Chinese New Year in the comments below. 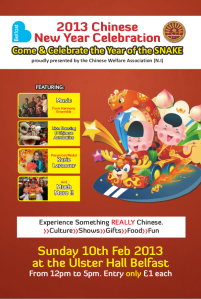 Billed as “Northern Ireland’s largest Chinese New Year Celebrations”, the Ulster Hall is set to welcome around 2,500 people for a day of festivities. Scottish/Chinese music fusion act Harmony Ensemble is the special feature – having discovered Delhi2Dublin at Belfast Mela 2011, I am a big fan of blending cultural music styles.

There will be acrobats and circus, ribbon dancing, martial arts, fashion, market stalls and of course – tasty food! The lion dance at 1pm is described as a don’t-miss.

I am intrigued by the “Snake’s Lair Workshops” for children – I imagine lots of colourful snakes of all shapes and sizes will be created.

Taking place at the Europa Hotel, the event is also a chance to mark the 30th anniversary year of the NI Chinese Chamber of Commerce (NICCC). The Gala Dinner is a fundraiser to support community work for NI’s Chinese population and the Chinese Language School. Guests will be treated to performances from local Chinese groups and star appearances from Hong Kong celebs. Tickets are £35 and available from Asia, Camseng & Lee foods supermarkets and the NI Chinese Welfare Association.

China is recognised as one of the world’s economic superpowers and this event in Belfast Met examines the opportunities in the country for NI businesses. Invest NI, the NICCC, CWA NI, Queens University, University of Ulster and Belfast City Council have joined forces with the college to host the conference. Taking place in the Titanic Quarter campus between 10am and 12.30pm.

Taking place at 12pm in the market, a chance to learn to cook a proper Chinese meal from scratch. Few other details available at this stage, so you’ll have to go along and check it out for yourself!

Dinner, accompanied by entertainment and a children’s Chinese dress competition. At the City Hotel, Derry from 5pm. Tickets £30/£18 concession.

Taking place in the Craft Village, the last day of the official New Year celebrations is marked with a day of outdoor performances, food, workshops and a market. A cultural show of acrobatics, music, martial arts, dance and of course, the traditional lions and dragons.

Carrickfergus throw their third annual festival for the New Year, featuring the Chinese Face Changer, ribbon dancing, workshops, astrology and dragons. It kicks off at 11am and entry is free.

I hope you all enjoy welcoming in The Year of the Water Snake – let me know what you get up to!