Yes, I’m still alive! Sorry the blog has been so quiet of late – I’ve been a little preoccupied with job hunting, as my work contract with New Life Counselling sadly came to an end on 17th May.

Happy to report I am back in gainful (albeit temporary) employment as of tomorrow, so what better way to celebrate than with a brand new regular feature – Monday Makes.

One of the reasons I started The Patchwork Quill was to explore my interest in crafting, and I’m aware the crafting content really has been lacking in recent months.

So this is me biting that bullet and pledging a weekly make-based feature. It won’t always be sewing – but this week it is!

In mid-April, I connected on Twitter with Cleo Crafts – a wonderful local company providing craft classes in Co Antrim. It wasn’t long before owner Louise Brogan tweeted about the sewing bee she was organising in Whitehouse Presbyterian Church. I signed up immediately!

The idea was to get a group of sewists together to make pillowcase dresses for Dress a Girl Around the World. It’s an initiative started in the US by an organisation called Hope4Kids International – sewing clubs and organisations across the US have been making and sending these handmade dresses to Uganda through the organisation’s Hope4Women project.

However, the original pioneers of the idea are happy for any groups to adopt the concept, if they have a connection to a community in a developing country they would like to help in this way.

For Louise, it was Liz Pineda, a fellow member of the Whitehouse congregation, who inspired her. Liz spent some time living in the Philippines and through the mission work of her local church, discovered Pundaquit, a tiny fishing village.

Despite being located a stone’s throw from a tourist resort dripping with wealth and abundance, the villagers have little, with the rainy season making fishing (their main source of food and income) impossible for three months of the year.

The church provides food, clothes, medical and pastoral care, as well as study classes for the children and a kids’ club.

When Liz pioneered the building of a toilet for the little settlement, landowners put a stop to it halfway through – more land was needed for the resort.

So it may not seem like much given what they’re up against, but sending some pretty clothes to the little girls of this town is a meaningful thing to do. We all feel good when we get something nice and new, especially if it has been specially chosen for us.

Any little girl will light up if she is given a colourful new party dress. This may be the only brand new item of clothing some of these girls have ever been given and each one is a pretty dress, handmade especially for them.

Anything which makes a child feel special and valued is only ever a good thing.

A great thing about the Dress A Girl Around the World sewing bee concept is that it’s based on a design anyone with basic machine-sewing skills can make.

The simplest design is the pillowcase dress. You buy a pillowcase, chop the closed end off to create a tube of fabric. Cut out armholes, hem the top edges, feed elastic through the hems and sew in place. Attach double fold bias binding around the armholes, tie them in bows and – ta-dah – you have a dress!

Or you can measure out fabric and sew a seam up one side to get the ‘fabric tube’ that the pillowcase sans closed end gives you.

We worked from printouts of these amazing instructions on Karen Mills-Thomas’ Dress A Girl Around the World blog.

The hall in Whitehouse was already bustling when I arrived, with women getting sewing machines and pillowcases ready.

There were two tables crammed full of donated fabric, decorative materials, scissors, pins, thread and milling around these two tables at any one time throughout the day were about half a dozen ladies, just volunteering their time to help cut, measure, fetch coffees or offer food around. 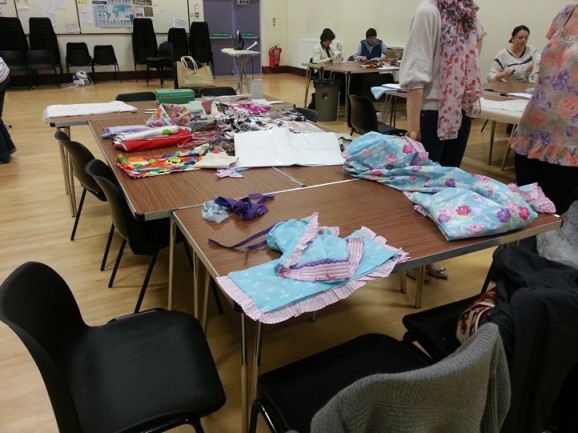 I found a space at a table opposite Niqi of The Hookery in the Bookery and had the most wonderful day chatting to her, Frances and another lovely lady whose name I have embarrassingly forgotten!

Niqi was by far the most experienced sewist in our little corner and became (whether she liked it or not!) a very patient teacher for many of us. Before long though, we found we were all growing in confidence – at one point I found myself talking a table of ladies through the first few steps of the dressmaking like a seasoned (ish) crafter!

The making of my dress: 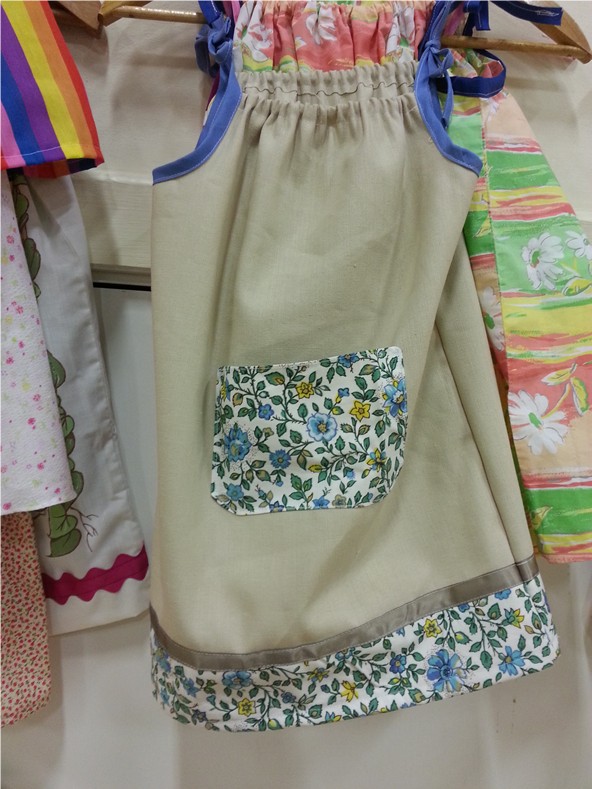 Having arrived at about 10.30, I left the sewing bee around 6 hours later exhausted, satisfied and with my heart feeling full.

The shared experience of a group of people coming together and crafting was so enjoyable – everyone was so friendly, we were all in a great mood and there was such a mixture of ages, personalities and skills.

The charity element added extra good feeling and speaking to Liz about the little town she loves so passionately was truly inspiring. Apparently we raised £75 in donations on the day, which will buy shorts for the boys.

Special thanks has to go to Louise who, with help from Amanda, put this whole thing together despite spending most of the week in hospital with a sick daughter (thankfully on the mend).

There is talk of another bee in June, which I have already committed to if it goes ahead!

If anyone out there fancies putting together a Dress a Girl Around the World sewing bee for a community around the world which you have a connection to – get in touch through the contact page; I’d be delighted to help you make it happen.