If you happened to stroll through Dublin’s Phoenix Park last Saturday afternoon, you may have found yourself a victim of the mischievous ‘Crank Set’.

Dozens of innocent passersby were accosted by a group that came from nowhere and took over the park on their bicycles. Clad in black bomber jackets emblazoned with their gang logo, they swooped on unsuspecting members of the public.

A far cry from the sophisticated sportsmen of the Giro d’Italia, these rowdy riders circled and chased people, sped down paths dragging sticks across railings, and created an unearthly racket wherever they went, thanks to playing cards jammed between the spokes of their wheels.

This surreal scene was actually the culmination of a unique art project forming part of the Bealtaine Festival, an all-island Irish festival which celebrates creativity as we age.

The Crank Set is a bike gang for over 50s, set up to welcome the Giro d’Italia and also to explore a new creative outlet for a group of people aged 50+.

Led by artist James Ó hAodha, the project saw the group come together to explore the ideas and imagery of gangs, with a view to setting up their own and staging a ‘rally’ in the park. During a series of workshops, they came up with the name, designed a gang logo and cycled together.

James specialises in work that involves creating encounters, in the form of interventions, performance, action and exchange.

He explains, “I was invited by Age & Opportunity – who run the Bealtaine Festival – to put together a piece exploring the older person’s experience of cycling, as part of the Dublin City CouncilGiro D’Italia Cultural Programme. The idea was to bring people together through cycling and create a piece of art.

“Whilst researching, I realised there were no cycling groups for people in this age group; plenty of sport-orientated groups, but nothing purely social. The idea of a gang came to me as a way of bringing the people together in a way that would create an artwork in and of itself, rather than just doing some cycling and then afterwards trying to create something about it.”

The project, and the rally in the park aimed to explore ideas around visibility, territory and ‘acting out’. Older people often speak of feeling ‘invisible’ so the idea of confronting people as a gang is a bold statement.

It also plays on our preconceptions of older people – how would you react to a gang of over 50s circling on bikes and making a racket? How would you feel about a group of teenagers doing the same? We may feel threatened by the latter and amused by the former – are over 50s being written off as benign and irrelevant? 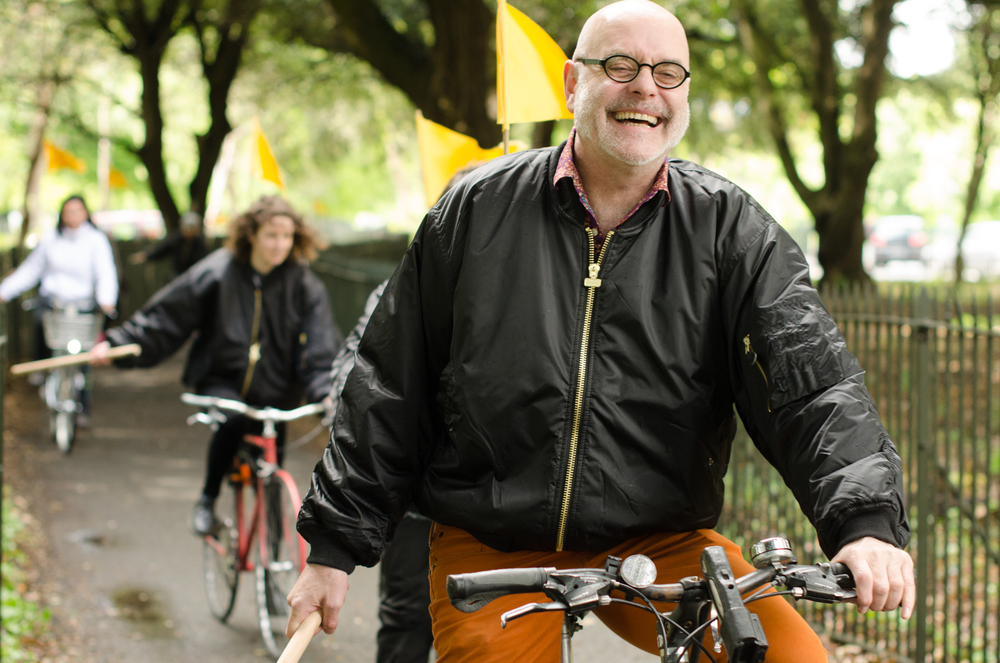 On the day, some gang members were joined by friends and family for a bit of moral support. Most of them ended up jumping on a bike, donning a jacket and joining in the mischief-making! This unplanned intergenerational fun added an extra depth to the day’s activities.

I absolutely love the whole ethos of this project. A lighthearted, fun and social celebration of creativity – but a very meaningful one. It’s lovely to hear that the group have enjoyed their time together so much that one of James’ longterm aims for the project is going to be realised – the Crank Set are staying together.

The group will continue meeting up to cycle together and socialise, so it’s possible some lasting friendships have been formed. James is happy for readers to get in touch if you want to find out more.

The Bealtaine Festival continues until the end of May, so check out what’s happening in your county here.